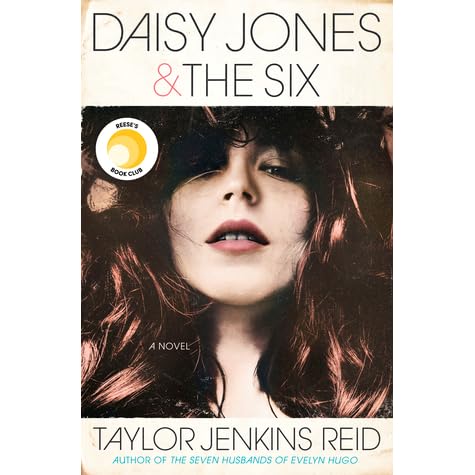 I’d seen this book EVERYWHERE on our instagram feed (follow us!: @nightstands2) and my strong FOMO made me tell myself that I have to read this book. I have had Forever Interrupted in my TBR list forever and just haven’t read it because at the time I got it, a friend told me I might not be emotionally ready for it, so I kept putting it off. I had read Seven Husbands of Evelyn Hugo some time ago and enjoyed that. I had seen in the comments that it was best to do this as an audiobook, so I put this on hold at my library and jumped on it when it came through.

Daisy is an up and coming artist who is a free spirit and doing what people did in those days – drugs, sex & rock n roll. The Six is a band trying to make it big and led by Billy Dunne, a rocker who gives in to the whims of fame and becomes an addict and isn’t always faithful to his loyal girlfriend, later wife, Camila who finds out she is pregnant with their first child the day before The Six leaves for their first tour.

The story of Daisy & The Six begins when Daisy joins the band and is in close paths as writer and lead singer with Billy Dunne. The band becomes one of the biggest bands in the 70’s up until their split and the book is about all the ups, downs and turmoils behind the scenes.

Guys, after reading this I think Taylor Jenkins Reid shot up as one of my favorite authors. The structure of this book was amazing and really impressive story telling by Reid. The book is told in documentary style a la Behind The Music, so it is told from the various character’s point of view (another reason why the audio is better). By the time you get sucked into the story, it’ll be so hard to not believe that this is NOT an autobiography and it is NOT about a real band.

Reid makes the characters sound so real and details their struggles with love, addiction, egos, turmoil etc so well which is probably why they sound so real. Based on the two books I have read of her, I have noticed that she knows how to write flawed human beings so well. It’s crazy how she can make a character who is doing shitty things still be charming and you still are on their side. That’s a skill, I tell ya.

As if the book wasn’t real enough Reid also wrote original music (which can be heard in the audio book), talk about commitment. I love the way the female characters were written. They were all strong women who weren’t taking shit from men and stood in their own truths and convictions and also were there for each other. I especially liked Karen and Camila’s friendship.

I can see how people could find the format annoying but it worked for me. It especially worked because it has been optioned as a TV show and I can literally see it playing out in my eyes in it’s transcript style. I promise I am not trying to sell the audio book but one last fun thing about it was the celeb voices such as Judy Greer, Benjamin Bratt and Jennifer Beals as Daisy.

If you couldn’t tell already, I liked this one and I recommend it (in audio of course)