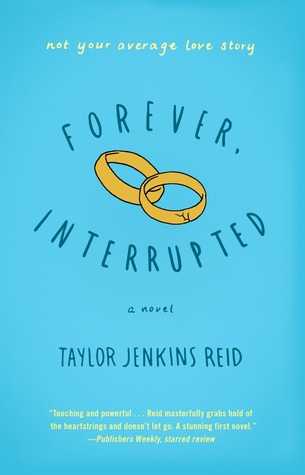 “Have you ever heard of supernovas? They shine brighter than anything else in the sky and then fade out really quickly, a short burst of extraordinary energy. I like to think you and Ben were like that . . . in that short time, you had more passion than some people have in a lifetime”

Elsie is planning to have a low key New Year’s Day and is looking to get nothing but pizza from her local pizza place but instead she finds Ben and the passion and love blossoms so quickly, in a way they had never experienced and they elope just months after meeting. But 9 days after they get married, Ben is in a fatal accident [not a spoiler] when he goes out to get Elsie cereal.

Their marriage is so new that no one except Elsie’s best friend, Ana knows. Neither Ben nor Elsie told their parents so it is very awkward when Elsie runs into Ben’s mother, Susan at the hospital. She has no idea who Elsie is and refuses to acknowledge their marriage. To make matters worse, the marriage certificate never made its way to them, so Elsie has no proof.

“No matter how strong you are, no matter how smart you are or tough you can be, the world will find a way to break you. And when it does, the only thing you can do is hold on.”

A friend of mine gave me this book about 4/5 years ago but I couldn’t bring myself to read it since I was going through a grieving process myself. I’ve been impressed by two of Taylor Jenkins Reid books (The Seven Husbands of Evelyn Hugo and Daisy Jones & The Six) and I am now on a quest to eventually read all her books so as soon as I was ready I went for this one.

I was interested when I started this book and somewhere along the line, I became disinterested. I kept wondering what the problem was till I realized the book was just boring. This took me by surprise because part of what I like about TJR is that she creates a world that feels oh so real but this read like one of those British chick-lit books where the protagonist is childish and bratty. I know it’s unfair to call Elsie this because she was grieving and not in her right mind, but she was so mean to her best friend, Ana!

“Things happen in your life that you can’t possibly imagine. But time goes on and time changes you and the times change and the next thing you know, you’re smack in the middle of a life you never saw coming.”

I do think what TJR did well was she captured the emotions of the characters very well. Whether speaking about the rapid love Ben and Elsie shared, or the friendship between Elsie and Ana, Susan’s grief or Elsie’s very confusing thoughts. It felt very human and didn’t seem unrealistic but as I write this maybe what took away from the book was Elsie’s character.

I’ve seen a lot of people mention how this book hit them right in the feels and it was emotional for them but I think part of my disappointment was just that – I felt nothing. Obviously, I was disappointed at reading a TJR book I couldn’t gush over but I felt better when I found out that this was her debut novel and obviously she has become much, much better.

This book wasn’t for me but I can see how people would like it. Also, it is a quick read so if you just need something filler, it’s the material for it. As Leggy always says, art is subjective.