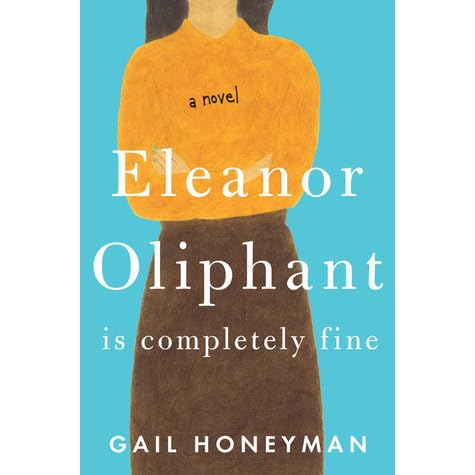 Think of a book you really don’t like. Now think of a book that you don’t like that EVERYBODY seems to love. Eleanor Oliphant is completely fine is that book for me. I read this book a few years ago and absolutely hated it. It was recommended to me by a friend and it was back in the day when I had not learned the art of dropping a book if I did not like it.

If you didn’t know,  I found out early on that I seem to have a problem with books with British protagonists. They are just never likable and I don’t know why. So from jump I was struggling with the book but powered through as mentioned above. By the end of the book I was annoyed, irritated and very relieved that I was done with the book.

To my chagrin, this book is a beloved one. I kept reading rave reviews about it, it was on every list imaginable. In fact, much to my chagrin before Covid19 struck, this book could almost always be found in every airport bookstore bestseller bookshelf – regardless of country.

Every time I see this book or someone tells me how they just “read this book that I really loved”, I’d roll my eyes and want to understand exactly what it is they loved. At some point, I took the time out to wonder what I was missing and what it is exactly I don’t like about the book.

One day, after giving my response for the 100th time as to why I didn’t like the book – I just couldn’t stand Eleanor. I took a step back and wondered if you don’t like a character in a book does that automatically make it a bad book or is it the reverse where it has been written so well that you have intense feelings of dislike for a fictional character? Do your characters have to be likeable to qualify a book as good?

While it definitely affects your enjoyment of the book, I want to say no. I’d like to think that you can separate the meat of a book and its writing from the likeability level of a main character. Book that comes to mind is A Little Lie. I found the main character very frustrating but I wouldn’t say I hated the book (although Leggy did so hmm) I think it was written well enough and the characters were fully fleshed out. On the flip side, I also don’t think I have ever described any of the aforementioned British chick lit books with annoying protagonists as “a good book”

So I pose the question to you, can you hate the main character or characters in a book and still think of it as a good book or does the intense dislike color your feelings towards the book?

3 thoughts on “Is It The Book I Hate…Or The Character(s)?”