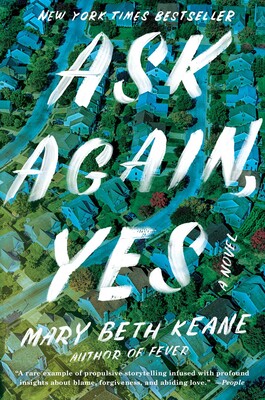 “The thing is, Peter, grown-ups don’t know what they’re doing any better than kids do. That’s the truth.”

The book begins with two young Irish cops who are partners, Francis Gleeson and Brian Stanhope, talking about their future and suddenly we are fast forwarding a few years and Brian moves next door to Francis with his new wife, Anne. Francis lives there with his wife, Lena and they already have their first child.

We fast forward again, Lena has two more kids and Anne has a son. The two never hit it off but Lena’s last born, Kate and Anne’s son, Peter become best friends. Kate is an escape for Peter, whose home life is not the best given his mom’s instability and his dad looking the other way and not doing anything about it.

Now teenagers, Peter and Kate sneak out one night and pledge undying love to each other and share their first kiss. Something major also happens that night that changes the trajectory of all their lives because, it unfortunately is also the last time Peter and Kate see each other for a long time and sets the stage for occurrences in the next decades in the lives of these two families.

FOMO led me to this book. It was everywhere on our feeds and in the book community and even though I didn’t know what it was about, I promptly got on the list for it at my library. I am glad I did because I quite enjoyed it. I’d classify it as a slow build that never really becomes a full fire but was still rich.

What I liked about the book was how human it was. It showed how generational patterns are hard to break. You see something you didn’t like growing up or you swore you would never do from your parents and somehow you end up there in the same place. And just how flawed we are as human beings. Keane was skilled enough to make some of her characters empathetic even through their ugliest moments. I liked how no character was left to be a saint and when you least expected it, their flaw would pop up and we would be immersed in a journey of the characters trying to work through it.

“They’d both learned that a memory is a fact that has been dyed and trimmed and rinsed so many times that it comes out looking almost unrecognizable to anyone else who was in that room or anyone who was standing on the grass beneath that telephone pole.”

It’s no spoiler to tell you that Kate and Peter reconnect and get married and their marriage and how everyone else reacts to it is an integral part of the story because it begs the question of how were they able to move past that fateful night? The book reminds you of how we get to see our parents as actual human beings as we get older and get a better understanding that they were trying to do the best they could. Except that some of these characters could have done better.

“She’d learned that the beginning of one’s life mattered the most, that life was top-heavy that way.”

Ultimately for each of these characters, Keane reminds us that no matter how old they got, their childhood eventually played a huge part of who they became as adults. Peter by all accounts was a good man but his demons eventually came to light and was stronger than his will to be a good human being.

When Francis and Brian become neighbors, I wish Keane had taken the time to let us know why the two weren’t close anymore. They didn’t even seem like they liked each other, so why did he move by him at Francis suggestion? I thought that was a bit weird. I wish Lena was dealt a better hand in life but again…life. Like I mentioned earlier, I liked this book. It’s not a feel good, happy book but it’s also not depressing. It’s more of an introspective one that reminds you that life can be complex but sometimes, there are rays of hope that usually comes with a lot of work.