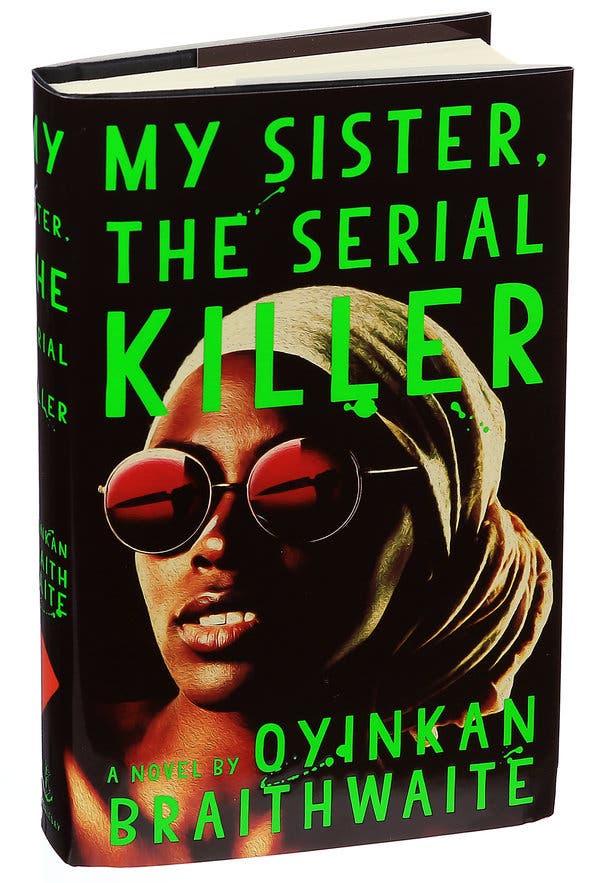 “The most loving parents and relatives commit murder with smiles on their faces. They force us to destroy the person we really are: a subtle kind of murder”

Taynement: I felt like there was a stretch of time last year when I saw this title everywhere. The Nigerian name caught my eye and I added it to my TBR list.

Leggy: So, what was your first impression of the title?

Taynement: I didn’t think anything of it per se. I think I just assumed it’ll be a book similar to Helen Oyeyemi’s style. Which is funny because I have only successfully finished one Helen Oyeyemi book (I generally find her tedious), so it’s interesting that I still wanted to read this. I’m glad it’s nothing like her work though.

Leggy: It was definitely the title that caught my eye and I thought it would be fantasy or some kind of metaphor but it is actually quite literal. I wanted to read it because a lot of book people were talking about it and it’s on the indie next list so I figured it was worth my time. Also, because I couldn’t find it on the “just released” table at Barnes and Noble and that table usually has everything! So what did you think of the book?

Taynement: I really liked it. I think it was straight to the point, easy read (hovers a little above 200 pages) and enjoyable. It’s a simple story of an older sister, Korede who protects her younger sister, Ayoola (the alleged, more beautiful one) who has a bad habit of murdering her love interests when she tires of them. I enjoyed that it was set in Lagos, Nigeria because knowing how terrible the system is, it made me wonder how a serial killer would fare.

Leggy: Yes, I really liked that it was short. It told a good story in a concise amount of words. It’s an easy read and I was intrigued by the familiar places in Lagos I could recognize. I’ve always thought serial killers would thrive in Nigeria so it was fascinating even watching them try to cover their tracks.

Taynement: Quite honestly, a lot of books could take a cue from that. Strip off all the extras and just dive to the point. But on the flip side, it did have that element of a short story (I hate short stories) where it leaves you unsatisfied as I did not feel we got an understanding as to why Ayoola kept killing these men.

Leggy: I didn’t feel that way at all. It didn’t leave me feeling unsatisfied. She was very clear that she killed the men because they were all terrible and treated women like objects. I think she considered herself some sort of sexist avenging queen. And she managed to convince Korede of that at the end when a male character, Korede thought was a paragon of goodness turned out to be just another man.

Taynement: I also think the author handled the flashbacks very well, weaving the current murders to their childhood and fear of their father.

Leggy: I thought the flashbacks involving their father was so well done, and showed how far back the older sister has been playing protector to her younger sister. I also liked how modern this book was. It incorporated social media in a way that was relevant and not gimmicky. When she writes about how her younger sister has to act on social media to project the grieving girlfriend part. I quite enjoyed the commentary about our social media selves and our real selves.

Taynement: I think it will be nostalgic for a lot of Nigerians – the nosiness of coworkers, the mother obsessed with marriages and many mentions of familiar Nigerian dishes.

Leggy: Definitely – The father who was terrible at home but obsessed with this reputation outside the home, the mother obsessed with marriage for her daughters despite having had a terrible marriage herself etc. I think the writer didn’t try to cater to the western gaze. The writer calls things what they are and instead invites the reader to explore another culture that they might be unfamiliar with in its authenticity.

Taynement: Yes, that was refreshing. It had to have been done well because usually whenever I read foreign books, I wonder how the west would receive it but I actually didn’t wonder about that while reading this book.

Leggy: What did you think of the whole coma story?

Taynement: Earlier, I was going to say that another thing I liked about this book was that it was layered, I think the coma story is an example of that. On one hand, it could be seen as random but I don’t think so. I think it served as an outlet for Korede carrying this huge burden. And the aftermath of the coma as probably a wake up call for her to live a life that isn’t one always borne from a direct comparison to her sister, because she might have her own world where people see her as a star.

Leggy: I just knew he was gonna remember once he woke up, would you have told as the patient?

Taynement: Definitely not. I would have been too freaked out. I think a huge part of this book is Korede easily blaming her sister for everything without acknowledging using her as a shield. She gave up on herself from childhood, and assigned roles – she chose the ugly and protective sister role. She didn’t have to always save her younger sister but she chose to, it was safer for her to live in her sister’s shadow even when she’s murdering her ex-lovers.

Leggy: Did you like how it ended? I was super satisfied with it.

Taynement: I think I was okay with it. I’m not sure I can go into detail without it being a spoiler but I think it was true to how life can be.

Leggy: Would you recommend this book to anyone? I’ve recommended it to so many people. I think it’s a good read and short, so it’s easy to get through.

Taynement: Absolutely! I thought it was a great book and a great intro, if anyone asked for a Nigerian author that isn’t Chimamanda. I also think this would make a good book club pick.

Leggy: I think so too, there are so many layers to discuss and analyze. I gave this 4 stars on good reads.

Let us know what you think in  if you have or when you read the book.

2 thoughts on “We ChitChat: “My Sister, the Serial Killer” by Oyinkan Braithwaite”