I have officially completed my goodreads challenge! Woohoo!! 70 books!! Anyway, instead of giving you just one book review, I decided to do a quick fire review of the last 4 books I have read, that way you have 4 more books to decide to put on your TBR or to decide that you definitely won’t be reading.

“Very little worth knowing is taught by fear.”

This is the first book in the Farseer’s trilogy. This book follows the story of Fitz, the king-in-waiting’s bastard who his mother drops off when he was 6 in the care of the king’s man, Burrich. Immediately the king- in- waiting hears that he has a bastard son, he abdicates the throne to his younger brother and exiles himself completely from the kingdom leaving Fitz alone in the palace with all the royal politics and treachery. Hobb is a fantastic fantasy writer and i’m appalled that it has taken me so long to get into her books. Also, she’s that rare woman in the fantasy world that writes straight fantasy without much regard to romance which I love. If you’re looking for a book filled with action that starts off with a bang, this is not the book for you but if you’re looking for a slow burn and character development and have the patience to wait it out then give this one a try, you wont regret it. This book was published in 1995 so i’m definitely late on the Hodd train but i’m not getting off anytime soon. Gave this one 4 stars on my goodreads.

2. Strange the Dreamer by Taylor Laini

“On the second Sabbat of Twelfthmoon, in the city of Weep, a girl fell from the sky. Her skin was blue, her blood was red.”

This is the first book in the Stranger the Dreamer duology (the second book just came out a couple of days ago). Lazlo Strange, war orphan and junior librarian, has been obsessed with the lost city of Weep since he was 5 years old. He has scoured the entire library looking for even a whiff of this city’s existence until one day he is given a chance to embark on a journey to the very city he has dreamt about all these years with the “godslayer” and his band of warriors. Once he is in Weep he starts dreaming about a blue beautiful girl who talks to him in his dream and who he starts falling in love with. If all the gods are dead, who is this blue girl in his dream who looks exactly like one of the slain gods in the pictures Lazlo has seen in Weep. I think the premise of this book is fantastic, and Laini is a talented writer. I’m rarely ever invested in romance in fantasy novels so I really skimmed a lot of the romance between Lazlo and his blue girl but this is one of those books that you know the sequel will be so much better  and I already put that on hold at my library. I gave this book three stars on my goodreads.

“I married him against all evidence. I married him believing that marriage doesn’t work, that love dies, that passion fades, and in so doing I became the kind of romantic only a cynic is truly capable of being.”

In real life, Nora Ephron’s second marriage ended because her husband cheated on her with someone she knew while she was 7 months pregnant, so what better way to get over a breakup and make money off of your misery by writing this exact story in a barely disguised fictionalized form? Ephron’s Heartburn tells the story of the breakdown of a marriage. Honestly, I think I only got through this book because I did it on audio and MERYL FREAKING STREEP reads it. This is just a fabulous audiobook. This book is only 179 pages so I probably would have still finished it if I had done this on paperback but there would have been a ridiculous amount of skimming. Apart from the synopsis I have given you, nothing else happens in the book. Honestly. There is a reason this book is just 179 pages long. There is no depth, no complexity, there is even barely a plot. I have been on a Nora Ephron kick lately, I read all her memoirs which I quite enjoyed and because I love “When Harry Met Sally” the movie, I decided to give one of her novels a shot. I think I enjoyed the listening experience more than I enjoyed the book. Also, this book was published in 1996. I’m really hitting those backlist titles! Gave this two stars on my goodreads. 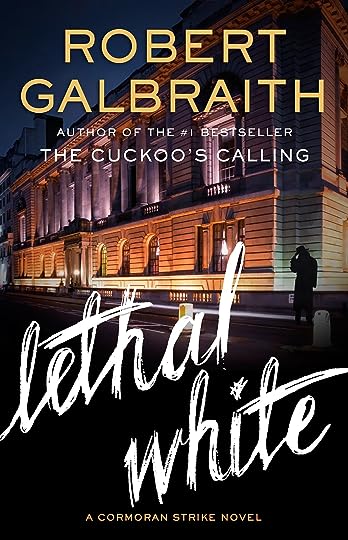 “I think marriage is nearly always an unfathomable entity, even to the people inside it.”

This is the fourth book in the Cormoran strike series, this just came out a couple of weeks ago. This book begins right where the old one stops with the wedding ceremony of Robin and the most arsehole, gaslighting boyfriend ever, Matt. Fast forward to a year after the wedding and this young mentally ill boy, Billy, comes into Strike’s office with a story of a strangling he witnessed when he was young. He’s not even sure if it really happened and wants to know if this is just part of his hallucinating. Strike is further intrigued when he gets a call from a politician who he discovers has ties to Billy asking him to take a private detective job in the house of commons. From here the plot gets more an more complicated, involving politics, blackmail, upper class dynamics and murder. I love whodunnit it mysteries, i’m so tired of “this could be the next gone girl” books. So i dived straight into this one once it came out and I was not disappointed. Galbraith writes the crap out of these books and they always keep me guessing. My qualms with this book is that they’re way too long for what it is, and I hope the next ones aren’t this long. Also, I do not want Strike and Robin to get together, I hate Matt and I want her to move on and find love or not but I do not want her to be with Strike. Why can’t men and women just have a good working relationship? Also, Galbraith is terrible at writing romance. Gave this one four stars on my good reads.

1 thought on “What I’ve Been Reading Lately : 4 Quick Fire Reviews.”