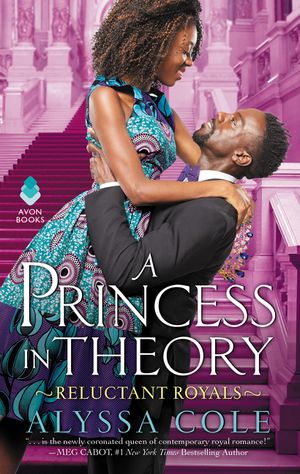 I’m not a huge fan of romance novels but I’m a huge fan of romance movies and after I read this post from Taynement about how romantic comedies aren’t being made anymore, I decided to read this book that’s been on my “when I make it to the beach this summer I’ll tackle it” list. I also decided to listen to it as an audio book to elevate the dramatic effect and make me feel like I was watching it. Thank you American library system!

A Princess in Theory is basically Black Panther if it was a romantic movie. This book is told from two perspectives. There is Naledi Smith who is an orphan American woman in grad school that has been getting a lot of spam mails from somewhere. She is not quite sure where, but thinks it is coming from a made up African country telling her that she is the Prince’s long lost betrothed. Then there is Thabiso who is an actual Prince and the only heir of the current monarchy in Thesolo – a small African country. He comes to America for a couple of meetings, goes to meet and confront Naledi at the restaurant where she works part time for ignoring his assistant’s emails, gets mistaken for a waiter and the familiar trope of mistaken identity kicks in! (strains of Coming to America)

Thabiso gets to know Naledi under the moniker of Jamal, she thinks that he is a trust fund kid of some sort  who has been cut off from the family, but never in her wildest dreams does she think that this Jamal guy could be a prince. They get to know each other as two ordinary individuals but obviously, this is a romantic book so the characters never seem to be able to make smart decisions and he tries to tell her who he is a couple of times but keeps getting interrupted and she makes the discovery in a very dramatic way.

I enjoyed this book. I thought it was well written and well narrated. I think it was a little longer than it really needed to be but I still enjoyed it overall. There’s a bit of mystery that shrouds her family history and why she left Thesolo as a child which kept me wanting to reach the end to find out. Even though I loved the chemistry between the two main characters especially during the first half of the book, I still thought there should have been more scenes to show us exactly why they fell in love and had such an amazing connection.

The second half of this book moves us back to the actual country of Thesolo and the descriptions of the country and its culture is quite fascinating and pretty. I understand how the book cover could be a turn off but literally don’t judge this book by its cover.  I mean I know Alyssa doesn’t need my help selling books but I implore you to look past the cover and give it a chance as I really did enjoy this one.

I gave this book 4 stars on good reads. Have you read this? Did you enjoy it? Please read it and tell me what you think. Happy reading week!