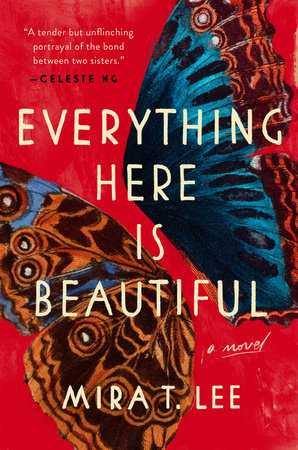 I love family dramas, give me a quiet slow burn between family members written really well and I’m absolutely sold. This story is about living with mental illness from the perspective  of the person with the illness and and the loved ones who have to be around the illness and how it affects them. Lucia is the younger, vibrant, spontaneous and mentally ill sister who is very much loved and adored by her sister, Miranda – responsible, older, mama bear whose entire existence becomes an obsession with getting Lucia to take her pills and stay healthy.

“Our mother might’ve said this: that immigrants are the strongest, that we leave our homes behind and rebuild. Everywhere we go, we rebuild.”

As the two Chinese- American sisters get older, we see them make vastly different decisions that drive them further apart both literally and figuratively. Lucia lives life on a grand scale, making huge, impulsive decisions, that take her to different corners of the earth. She marries an Israeli man, Yonah, who she leaves abruptly to fulfill her desire to have a child and she has one with a young undocumented immigrant named Manuel.

They end up moving to Ecuador to raise their kid but the truth remains that she cannot escape her mental illness as she still has to live with her brain everywhere she goes. The voices come and they take her hostage.

“Querencia. It refers to that place in the ring where a bull feels strongest, safest, where it returns again and again to renew its strength. It’s the place we’re most comfortable, where we know who we are—where we feel our most authentic selves.”

As we examine Lucia and her brain, every character around her is fully developed and fleshed out and do not just exist as caricatures to drive Lucia’s story forward. We hear about the lives they built for themselves before and during Lucia. This story is told from alternating perspectives so everybody gets a turn to tell their side of the story. Everybody’s story is treated as important and worth hearing. My favorite was the harrowing story of the undocumented Manuel in New York city and how consuming that experience of being absolutely scared of your own shadow for fear of being caught and deported, can be.

“And then, her worst fear: that the line between her sister and her illness was becoming irrevocably blurred”

Mira Lee’s portrayal of mental illness in this book is raw and very real. It was actually quite difficult to read. She makes the readers question where a person ends and their mental illness begins? What are Lucia’s eccentricities and what are her symptoms? When is she being spontaneous and vivacious and when is she being manic? When is she just sad because she’s human and this is life and when is she actually depressed? what are her thoughts and what are the voices?

There are times when everything here is beautiful but a lot of times in this book, everything is just sad and heartbreaking.

I gave this book four stars on good reads and I definitely recommend it.

Have you read this? did you enjoy it? Are you going to read it?

Taynement adds: I audio’d this book and didn’t quite have the same experience Leggy did. Like we have said before, a narrator can make or break a book and I did not like the different narrators as it made for inconsistencies. My favorite narrator was the voice of Manuel and I was bummed when his next view point was read by another (female) narrator vs. the original. All I am trying to say is I would not recommend audio’ing this one.