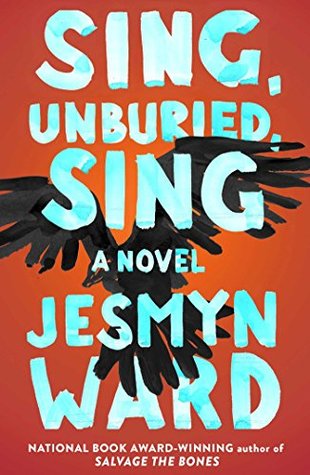 “Sometimes the world don’t give you what you need, no matter how hard you look. Sometimes it withholds”

Somehow, subconsciously, I think I might have adopted Leggy’s reading goal of reading more [female] African-American authors because here I am with another one. This book was on all the “best” lists last year and even though it didn’t seem like a book I would be interested in, I had it on my TBR read because…FOMO. I shall not be left out. So to my library waiting list I went and I finally got to read it.

The quote above encapsulates the general vibe for the characters in the book. Life can be unfair no matter how much you will otherwise. Told from the perspective of 13 year old Jojo, we see a glimpse of his life living on a farm with: his little sister, Kayla who trusts no one but him and practically clings to him all the time, his protective grandpa who he is close to, his dying grandma, his mom, Leonie – a drug addicted young lady with not a single maternal bone in her body and finally his Caucasian father, Michael who rotates in and out of jail.

Leonie decides to take her kids on a road trip to go pick up Michael who is being released from yet another stint in jail. That journey is how Ward gives us background on our characters as we hear about their lives before the present day interspersed with a mystical character that we are first introduced to via stories told to Jojo by his grandpa.

Guys, I tried but this book just didn’t do it for me. Hint #1 was how long it took me to read it. Once a book takes me forever to get through, then it’s not a good sign. I don’t think I expected as much fantasy and mystical elements as this book had. I am usually not a fan of that, so this lost the book points from me. This could be a me problem but for the life of me, I could not figure out what time period this book was set in. At first, I thought it was way back in the slavery days till something would allude to more modern times and I just gave up trying to figure it out.

I could understand what the book was going for – a haunting, harrowing tale but somehow, I just couldn’t be bothered. The stories were enough for your heart to go out to various characters involved but somehow, I was not invested. The story line did not interest me or make me want to know what happened next. I also wasn’t a fan of the sequencing, which is much harder to follow when you are already uninterested. I am not quite sure how I finished this book, to be honest.

Overall, I see quite a lot of high praise for the book but unfortunately, I am not one of them. This is not a criticism of the writer’s skill because, I do think she is a good writer, I just think the story was just not for me.

This book received 2 stars from me on Goodreads.