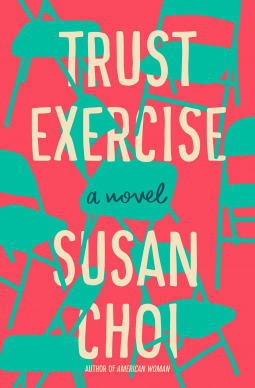 Plot: In an American suburb in the early 1980s, students at a highly competitive performing arts high school struggle and thrive, ambitiously pursuing music, movement, Shakespeare, and, particularly, their acting classes while dealing with teenage issues and predatory teachers. 12 years later, they look back on their lives in this performing arts high school and try to dissect what actually happened to them there.

Taynement: It’s been a while since we had a chitchat. We ended up with Trust Exercise because I was seeing it win so many awards

Leggy: You know, I went into this book without reading any description whatsoever because you picked it. I was like Taynement likes plot driven books so this will be good.

Taynement: Ah, is that a first for you? Going in blind, I mean.

Leggy: It’s not a first but I usually read plot blurbs before I pick a book to read, just to see if it’s my cup of tea.

Taynement: Ah okay. At the risk of sounding like a broken record, I went in completely blind

Leggy: I kept reading it and when I got to the 20% mark on my kindle, I had to go see what the book was supposed to be about. I just wasn’t getting any consistent plot.

Taynement: I think this was my thought for the entire book. I see what the main theme was but man, it did NOT work for me.

Leggy: I truly thought I was going to give this book 1 star. The beginning just didn’t work for me at all. The middle I liked more when the voice switched to Karen’s. I thought Karen had a stronger voice and point of view than Sarah.

Taynement: So I did this on audio and with each switch I wondered what I missed. It took me a minute to get back into the groove and realize the story switched and it honestly confused me.

Leggy: Karen is the only voice that worked for me and the reason for my one additional star. I thought this book could have been so much more but it’s very obvious it was written for awards. This book was a freaking Pulitzer finalist.

Taynement: The thing is if this book had the main goal of highlighting sexual assault or predators I think it did a piss poor job. I think my issue with this book was it tried to be smarter than itself and ended up all over the place.

Leggy: That’s exactly what I mean by it was written for the awards.

Taynement: I was so confused by their teacher’s story line. I thought it was borderline abuse and predatory but it was so vague I couldn’t tell if it actually was or if it was normal in the theater world. I’m referring to when he made Sarah and David reenact their breakup.

Leggy: I guess the theme seems to be that no one knows what exactly “truth” is. We’re all locked into our own points of view. Everybody has a spin. Sarah and Karen and David all lived the same things but came out of it with completely different views. David became friends with his abuser. Sarah is mad when she sees Mr. Kingsley at David’s show and wonders how David can be friends with him. Sarah portrays Mr. Kingsley as gay but Claire portrays him as extremely straight and masculine.

Taynement: Oooh, that’s an angle I can see. I really do not think this book should be done on audio. I was so disinterested by the characters, I just went through the motions of finishing the book.

Leggy: I think it shows the effects of grooming. They were all being groomed by Mr. Kingsley. In her retelling, Sarah makes Kingsley gay and invents Manuel as a character he was molesting. But then in the second part, Karen tells us it was actually Sarah Mr. Kingsley was having a “special” relationship with. And then Martin grooming Sarah and getting her pregnant. It’s all rife with abuse, different points of view and the subjectivity of truth. But my thing with this book is okay, so what’s the point?

Taynement: Yeah it never really wrapped things up in a clear manner. So you feel like you’re taking this journey and taking in the scenery but you never get to any destination.

Leggy: For such a popular book it barely has 3 stars on good reads. Ordinarily, I enjoy unreliable narrators and narratives and I do think this will make a good book club pick to discuss the subjectivity of truth and what actually happened to those kids in high school but I don’t think it was executed well.

If I wasn’t reading this for a chitchat, I would have dropped it after the first 50 pages. I found the first part of this book overwritten with these huge emotions and I understand that those emotions seemed so huge because they were teenagers. But if you’re going to write from an omniscient point of view and not a first person, then it’s just over written.

Anyway, this book is more fun to discuss with your book people than it is to actually read. My advice? Skip this one. I gave this 2 stars on good reads.

Taynement: The execution was shoddy. I agree, skip it!

1 thought on “We Chit Chat -Trust Exercise by Susan Choi”