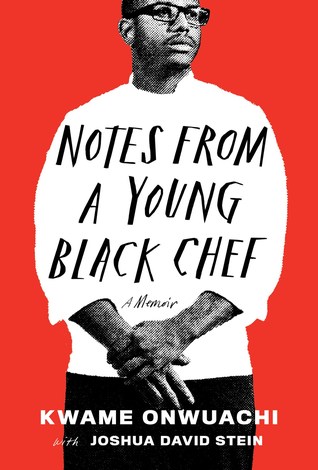 I first knew about Onwuachi when he was a contestant on Top Chef. I was excited to see a Nigerian name on such a global scale, even though I was confused that his first name was not. Even though I was rooting for him, I was a bit disappointed that he didn’t seem to embrace his Nigerian side fully and even the judges told him he needed to find a point of view. I say this to say, my knowledge of him via the show made me form a not so keen  opinion of him especially now that he is the executive chef of the widely popular Kith/Kin which fully embraces Nigerian cuisine with a flair.

Onwuachi tells us about his life growing up in the Bronx to a Nigerian father and Louisiana mom. The marriage was not a good one and his parents split. Onwuachi suffered physical abuse from his dad (who overall just sounded like a horrible man). His love of cooking stemmed from his mother who was a caterer. He never told his mom about how his dad beat him up and instead acted out which led to his mom sending him to Nigeria to be with his grandfather. This was a short section but had a major impact on him. He connected with his grandfather who told him stories of his ancestors and he learned about Nigerian dishes.

By the time he made it back to America, he had forgotten all the lessons he had learned and started rolling with the wrong crowd. Onwuachi tells us how he got involved with gangs and dealing drugs. He didn’t last long in college and feeling lost on his mother’s couch he got a cooking job on a boat which started his rise in a career as a chef.

So I will admit, I pegged Onwuachi wrong. So wrong. I had a better understanding of why he was the way he was on Top Chef. While addressing the racism he has encountered in his career he mentions how a producer told him that America was not ready for a black chef who did fine dining.

I always say the best ingredient for a memoir is being open. I originally wanted to say that Onwuachi was open because he was about his life although he mentioned nothing about his personal life until the end when there was a random mention of a fiancee. He had no qualms mentioning names including a racist chef in a Michelin star restaurant. He was very detailed about the rise and fall of his restaurant Shaw Bijou within months. I feel like I got a good sense of who he was and who he is. I thoroughly enjoyed the flow and how it was written.

I was disappointed that the book didn’t extend to how Kith & Kin was borne. Another thing that irked me was that every chapter included a recipe and during the Nigeria section he kept calling Egusi soup, Egusi stew and I cringed every time I heard it.

Overall, I really liked this one. Onwuachi’s unwavering belief in himself was palpable and motivational. He is not humble about it and is very confident in his abilities and what he can do, which is a much needed quality for a black man in America, regardless of your field. It was a quick read that you would easily find yourself immersed in.

2 thoughts on “Book Review: Notes From A Young Black Chef by Kwame Onwuachi”