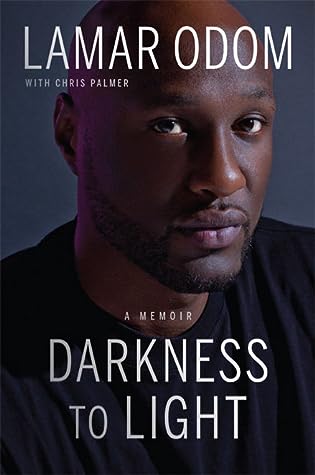 Darkness to Light is a memoir by Lamar Odom who is known either as a basketball player or better known as Khloe Kardashian’s ex-husband. Much of Lamar’s life has been played out in the media for better or worse but I think the difference with the memoir is that we get to hear from Lamar’s point of view.

Using a ghostwriter (who was not very good), Lamar tells us about his life which is riddled with issues from the start with his parents. Lamar had a hard life. His parents got together young but it did not last long and his father left and became an addict. He loses his mother young and honestly, I think that was the catalyst to a lot of his problems because he never really dealt with it and he was filled with a lot of grief and confusion.

He discovers his talent for playing basketball and throws all his focus and emotions into basketball. He meets the mother of his children, Liza in high school and chronicles his journey into the NBA. His deep spiral into drugs and how he hid it – including the dodgy ways he bypassed drug tests. His constant cheating and sex addiction diagnosis. The many deaths of loved ones, he has to go through. Dating Taraji P Henson, meeting, marrying and being part of the Kardashian clan and his infamous overdose at the Bunny Ranch.

The good thing about this book is that Lamar is very open and vulnerable in this book and he shares things that he didn’t need to. Although, I always say the key to a good memoir is laying everything out on the line, if you aren’t then there really is no point. If I am being honest, a big propeller of reading this book was to get to the Kardashian bits and see if there was tea to be gathered.

I think Lamar was very respectful of everyone he mentioned in the book and while still being honest, was not disparaging. For example, he doesn’t hide his distaste for Mavs owner, Mark Cuban and says being a part of the Kardashians was one of the best times of his life as he felt like he belonged to a family unit, which is something that he had never really had.

Lamar used a ghostwriter for this book – Chris Palmer, and I have to say, he had to have been the cheapest one they could get because he was not a very good one. It was such basic writing, that the book read like a middle school essay. He particularly had issues with transitioning. I can’t tell you how many times he had a sentence that said “xyz did I know that this will be the day that would change my life forever”. In a particular instance where he describes the death of his best friend on Khloe & Lamar, Jamie (who we find out wasn’t really his best friend but the producers wanted him to have a white best friend and they did drugs together so he won the spot of best friend) it basically was reduced to one page and that was that.

On the flip side, I couldn’t help but think that Lamar seems quite detached from the world. While you sympathize with all he had to go through, I couldn’t ignore how he also did a lot of things that hurt people. I couldn’t understand why Liza stood by him and even had more kids with him even though he constantly cheated and ignored her (Lamar claims he has been with over 2000 women and has paid his fair share in abortions). His wily ways to beat a drug test, shows insight into a side of him that some may say just comes with being an addict.

Overall, I think I got what I wanted from the book. I’ve seen a lot of people comment that he was name dropping in the book and I find that ridiculous because he was a famous man moving in famous circles, it is expected. You get a better picture of how Lamar ended up as a drug addict and you feel some kind of sadness wondering where he would be if he had dealt with the depression from losing his mom or losing his child instead of turning to drugs.

It was a quick, easy read but don’t go in there expecting quality writing but instead expect to ponder life and how the little or big things change the trajectories of our lives.