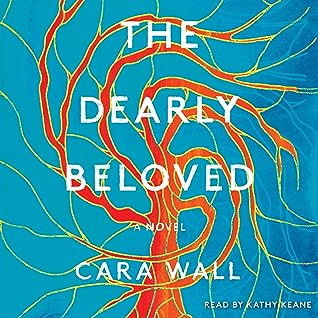 “What a privilege, Nan thought, to believe oneself completely independent, to feel unshackled by social conventions and the worry of what other people might think. What a blessing, to be lonely in that particular way.”

This book follows two couples – Charles and Lily, James and Nan. They meet in New York when Charles and James are hired to be joint pastors for the Third Presbyterian Church and we follow them through their journey of faith, marriage and family over the years.

Charles is the son of an esteemed Harvard professor who was already on his way to becoming a professor also,  when he hears a lecture in school that leads him to God. He meets and falls in love with Lily who does not believe in God, who warns him to not have hope in his heart that she’d ever believe.

Nan is a pastor’s kid who grew up and spent all her time in church, her father insists she leaves Alabama to study in Chicago and expand her world view. She meets James in college, drags him to church and even though James isn’t sure he believes, he develops an intellectual curiosity about Christianity and decides that this would be his avenue to help the world.

“Dearly beloved,” he began. They were the words that started weddings, not baptisms, but the people in the church were his beloved, so dear that as he spoke his heart and throat grew tight.”

I went into this book with really high hopes because of the glowing reviews and high praises I had read about it, but I think it fell short of my expectations. I like how this book deals with the various ways faith manifests and also deals with the lack of faith really well. There was no judgment or preaching to the audience about what faith or a lack of it should look like or represent. The author presents you with the facts of our characters’ lives and leaves any other presumption up to her readers. This book spans 50 years and Wall does a great job of telling this story with a solid backdrop of historic events surrounding each year – civil rights, Martin Luther King, segregation, etc.

“Nan had known, as a child, that God did not answer prayers for more candy or new shoes. Those were worldly things, not sacred. God answered prayers about being a better friend, or being able to get a good grade on a test. God gave wisdom and the ability to work hard. God did not change the circumstances of your life, God changed you. ”

I really liked how the friendship between the couples wasn’t stereotypical, they didn’t hit it off and become friends for life and forever without any struggles. Wall portrayed these couples’ friendship very well. The gossip,  jealousy and incompatibility between four people from completely different places and different belief systems. The dynamic between the women was especially intriguing. I enjoyed that even though they were two very different people, they showed each other compassion when they both needed it most. They gave each other space to be flawed and human and I think this relationship was my favorite in the book.

I found Lily and Charles’ marriage to be very stifled and unfulfilling. I don’t understand why a pastor would ever marry an atheist who never even went to his services. I just kept wondering why they were together. Charles believed wholeheartedly in God and in the Bible but still decided to marry someone unequally yoked with him? It didn’t make any sense to me. Also, I wish we would have gotten more about the pastors when they were older and better established in their faith and jobs instead of focusing mainly on their college and early ministering years.

Ultimately, this book didn’t make it past 3 stars for me. This was a debut novel so it is definitely a solid effort from the writer and I’ll be reading more from her. If you don’t like gentle and slow reads, this book is definitely not for you. If you loved, Crossing to Safety by Wallace Stegner, then consider giving this book a read.