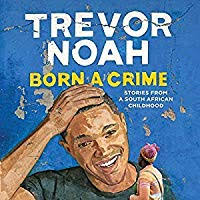 I heard so much about this book and for no good reason at all, I just had no desire to read it, so I stayed away from it. Sometime, late last year I was looking for an audiobook to listen to and it was available in my library so I decided to go for it. Born A Crime is an autobiography of sorts that focuses on Noah’s childhood in South Africa. The title, Born A Crime is because being born in the times of apartheid where having a black mom and a white dad was illegal, he literally was the product of a crime.

The book is written as a collection of essays and Noah talks about his childhood in depth right from the moment his mother made a decision to get pregnant with him. He talks about how mischievous he was as a child, how his mother – who is really the heroine of the book – did so much to protect and raise her child to be his own person in the most unconventional way, how he grappled with religion as a child and basically navigating this world he was in as a biracial child.

This book was great. I started it and was instantly drawn in. Noah’s intelligence seeps through in the way this book is written because he is able to tell his story even when it is at its most gruesome in a light hearted way. He finds a way to come out with a lesson  and how it contributed to who he is today.

As mentioned earlier, his mother was a major character in the book and wow what a woman or should I say, what a human being. Patricia Noah’s fearless energy shone throughout the book. She made bold decisions and was a determined person who fiercely loved her children. She had interesting child rearing tactics but it worked for her. It was also so fascinating to me that a woman with her characteristics still ended up with bottom barrel men who were abusive towards her, to the point where she almost lost her life.

The essays were not written in chronological order, so in one chapter Noah could be 19 and in the next he is back to being 11 years old. I didn’t quite like that. And even though I know it was about his childhood, I would have liked to know how he veered into comedy. Other than that this book really was an absolute delight. I feel like I say it a lot but listening to it via audio was a treat. Noah’s inflections, voices/accent imitation, singing and comedic chops made it even funnier and really took you to the setting of the book.

If you are looking for something fun that’s also serious, I definitely recommend.