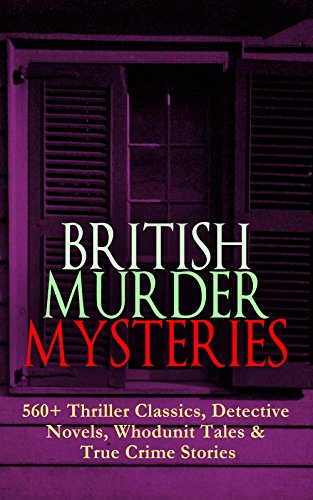 I love British mysteries. As much as I like the mystery thrillers that are all the rage in the US these days, since Gone Girl came on the scene and made so much money, the true love of my life are the simple mysteries that are not complicated and are straight forward. Books that are just simple, delightful reads like the ones I used to read when I was younger. I think the British have this market cornered, nobody does great whoddunits like they do and I’m here to give you some recommendations to add to your already huge summer piles.

“Do not undervalue what you are ultimately worth because you are at a momentary disadvantage.”

This series is a good retelling of the original Sherlock Holmes with the difference being that the protagonist is a 19th century woman. Observing her surroundings and advising the police department and Queen’s Men while hiding her real gender from the world and her clients. The first book in the series is called “A Study in Scarlet Women”, the second one is “A Conspiracy in Belgravia” and the third one which comes out on the 2nd of October is called “The Hollow of Fear”. All the titles are a subtle nod to the original Sherlock Holmes stories by Sir Arthur Conan Doyle. They don’t take themselves too seriously and I really enjoyed reading them.

“You’re like everyone else, Strike; you want your civil liberties when you’ve told the missus you’re at the office and you’re at a lap-dancing club, but you want twenty-four-hour surveillance on your house when someone’s trying to force your bathroom window open. Can’t have it both ways.”

J. K. Rowling writes these books under a pseudonym. These are really easy to read fun mystery novels  with the usual tropes. There really isn’t anything original about these books but they are written well and the characters are very fleshed out. Cormoron Strike is a wounded army veteran with a troubled past, terrible love life and financial woes.  He leaves the army and sets up his own private detective agency but has the nagging  problem of having no paying clients. He hires a temp secretary who has ambitions of being a private detective herself – Robin Ellacott, gets a high profile case and the rest is history. At the end of each book we get to know more about our two main characters and come to care deeply about their welfare. There are three books already published in this series and she’s currently working on the next one but still no release date available.

“As far as I’m concerned, you can’t beat a good whodunnit: the twists and turns, the clues and the red herrings and then, finally, the satisfaction of having everything explained to you in a way that makes you kick yourself because you hadn’t seen it from the start.”

This is a standalone mystery book and is a mystery within a mystery. Editor Susan Ryeland gets Alan Conway’s latest mystery novel and doesn’t think it’s going to be any different than his previous novels except Alan Conway dies the very weekend he submits the novel – of a suicide. Susan Ryeland rushes to read the manuscript to rush production of the books but finds the last couple chapters of the book missing and we’re off to the races. This book was quite fascinating because we get to read the submitted manuscript and also deal with the mysteries in real time surrounding the missing last chapters and the death of the author. This is a nod to the golden age of mysteries so if you love reading Agatha Christie’s works this book is definitely for you.

“You think it’s just selfishness? ‘just’ makes it sound trivial. All crime is caused by selfishness, I say. It’s the ‘me first, my needs first’. Take that away and you’re like one step from paradise”

Even though there are 7 books in this series, I have only read the first one which is what I will be recommending today. This British police procedural opens with the apparent accidental drowning of a sixth form student, it’s an open and shut case so it gets handed to Detective Sergeant Smith. Detective Smith is just coming back from suspension after an internal investigation involving a previous high profile case that caused a lot of tension in the police department. He is handed the small cases to ease him back in, but it ends up being a murder case. The latest trainee detective to work with him is the son of a member of his former team, and together they begin to unravel the truth about what happened to Wayne Fletcher. If you’re a fan of cozy mysteries or Louise Penny, you’ll probably like this too.

Have you read any of these books? Which ones are you likely to read? Let me know in the comments!