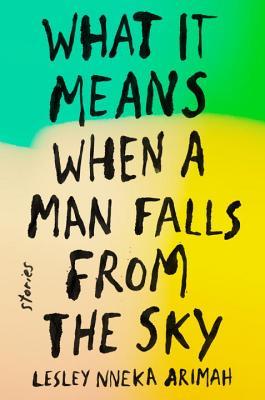 “When Enebeli Okwara sent his girl out in the world, he did not know what the world did to daughters. He did not know how quickly it would wick the dew off her, how she would be returned to him hollowed out, relieved of her better parts.”

Leggy: So we finally read this book after weeks of calling it “man falls”.

Leggy: Uggh, I do too, just when you’re settling into the drama it ends all of a sudden.

Taynement: Like! It’s so unfulfilling. But this book had a lot of good reviews and me and my FOMO. Can’t be left out.

Leggy: I only read it because you reminded me everyday to, and I promised you I was going to read it before Sunday. So yesterday, I just sat down and finally read it. I was quite pleasantly surprised.

Taynement: Yes, same here. I’m not going to lie and say I went in with an open mind. I remember telling you how I wasn’t quite feeling the first two stories – “The Future Looks Good” and “War Stories”. But I have to say while “War Stories” didn’t really hit me in the face, in hindsight it was one of the many taboo subjects (in Nigeria) that she wove into a variety of stories in a subtle way. In this case – mental illness/ depression.

Leggy: I absolutely loved “War Stories”. I thought it was subtle and well done. I loved the conversation between Nwando and her father about the war:

“So what happened to the lieutenant?” I asked, wanting another story to erase this one.

I thought it was very well written and conveyed a lot of hidden emotions and explanations for Nwando’s father’s mental health state mixed in with the guilt he must be feeling.

What was your absolutely favourite story though?

Taynement: I’d have to say it was between “Light” and “Glory” but I’ll go with “Light”  because the end of “Glory” was absolutely infuriating and I have no idea what it was!

Leggy: I loved “Light” too. It was so well written and it sort of broke my heart. I enjoyed “Glory” till the absolute last sentence where I just felt like she deserved all her bad luck if she ended up making the decision I’m scared that she made.

Taynement: Yes, I found that Lesley’s writing shone more when she wrote about family relations within the Nigerian culture. And her weaknesses showed more in the futuristic/sci-fi type stories.

Leggy: I think she could have used a better editor. Some of the writing was awkward.

Taynement: Yes, I agree. I had to reread a lot of things many times over to grasp what she was trying to say.

Leggy: But this is a debut and I expect most good debuts to just be a show of potential not a show of genius.

Taynement: I remember the first story, I read the first few lines so many times trying to make sense of it and I found myself doing that later in some of the other stories.

Leggy: I couldn’t grasp what metaphors the sci-fi ones were trying to portray or maybe they were just stories and I’m thinking too hard.

Taynement: You have to be referring to “Who Will Greet You at Home“. I’m not sure I got what that was about. Even at the end.

Leggy: I actually really loved that one as a story in terms of its writing. It’s the ant one I did not get at all – “What is a Volcano?”. I was like okayyy, and sooo? What is the point of this? I understood the end being a metaphor for a volcano and the story being about natural disasters and how a volcano came to be? I don’t know, it just wasn’t tight enough or well done.

Taynement: Goes back to the awkward writing. Which I think as time progresses she will iron out as she has so much great potential as seen in the premises of her stories. They are very ambitious. She is able to create a world in which the reader is interested in what happens to the characters.

Leggy: Yes, I would really love to read a full length fiction book from her with Nigerian characters. I think she does that so well. Like “Light” could have been a full blown book, I wanted so much to read more about the characters in that story. Can we talk about “Windfalls” please? How disturbing was that?

Taynement: Hella Hella disturbing and to be honest, I read those characters as Americans. Just couldn’t imagine them as Nigerians in my head. I felt grossed out and couldn’t wait to finish the story. It didn’t fit in with the rest of the theme of the book. When I say themes, one of the things I liked about the book was how it had a consistent theme of Nigerians of two cultures who either lived in America and went back or lived in Nigeria and came to America. That would be very relatable to a number of Nigerians.

Leggy: I guess it’s a case of write what you know. The author was born in the UK but moved back to Nigeria for a couple of years and now lives in the US. Did you absolutely hate any of the stories?

Taynement: Hate is a strong word and I’m sure this would be an unpopular opinion but “Who Will Greet You at Home” just required so much mental labor and I was annoyed by that. I wasn’t prepared for that kind of story and when I thought I was easing in, I got confused again.  Then I felt there was a point being told but for the life of me couldn’t pick out what it is so yeah…

Leggy: I liked that one but I do understand what you mean about the mental labor required to get through that story. It’s a little draining.

Taynement: I feel like you liked more stories than I did.

Leggy: There wasn’t one particular story that I didn’t like. I thought they all had a little something that worked for me even if the general story didn’t. A line here, an image there. She always has a flash of potential that stops you from absolutely hating any of the stories.

Taynement: Actually this is interesting because I think I liked the book but the more I go over the stories, I find there weren’t many stories that I loved. I just liked them enough. But the ones I loved and liked enough, I strongly did. And yes, you have a point. Every story showed her potential which is easy to appreciate.

Leggy: I also think it’s easy to think a book was absolutely great when it exceeds your expectations. I didn’t expect to actually like this book. So because I was pleasantly surprised I thought it was better than it actually was until I started talking about it to you just now. I ended up giving it 3 stars on goodreads because I “like it” but didn’t “really like it”.

Taynement: Heeey, don’t make me sound like the villain. I gave it a 4 but now I think I may have been too generous.

Taynement: Overall though, I would recommend the book especially if you like short stories. There was something for everyone and I think it’ll be interesting to see what stories resonated with people.

Leggy: Yeah, I would absolutely recommend it and I’m going to keep an eye on this author. She’s going to write greater things in the future.

“If you can’t please the gods, trick them.”